It is finished… You have probably heard or read those words many times. Jesus says them in John, chapter 19, as he is crucified, right before he dies. They are actually the very last words he says; at least before his resurrection. But I have rarely stopped to think about what they mean. Like so many other verses, I just read over them and don’t think about the deeper meaning. I think something along the lines of; ‘Of course it’s finished, He dies! Duh!’.

However, the wording and meaning here are not so simple. Tim Mackie explained that the entire sentence “It is finished” is actually one word in the original Greek: tetelestai. It derives from a word that can be translated as to finish, but it has more nuance than that. It means to accomplish something, or to complete a purpose. It is another way of saying ‘Mission accomplished’ or ‘My work is completed’.

It is a feeling that you probably know. Imagine an important paper you had to write in high school or college. You worked hard on it; it cost you tears, sweat, and many sleepless nights. But you finished it, and you passed the class or even graduated. You feel a sense of relief. That that period is behind you. You will never have to go back or write that paper again.

Now, in John 19:30, John does not spell out clearly what ‘it’ is, that is finished. Which mission did Jesus accomplish on the cross? However, John does refer throughout the book to Jesus having come to do or finish work, assigned by the Father. So we’ll look at two of those instances to see what (part of) the mission of Jesus was.

In John 1:29 John the Baptist tells the people that Jesus is the ‘Lamb of God, who takes away the sins of the world’. This is a rich reference to the Passover. When the people of Israel were enslaved in Egypt, God sent a final plague to Egypt. The people of Israel would be passed over if they killed a lamb and painted the blood of that lamb onto their door posts. Israel was saved after this plague, so the sacrifice of lambs became a corner stone of the Jewish faith. In the Jewish faith animal sacrifice was used to atone for sin. The idea was that the animal carried the sin, and as it died so did the sin.

When this reference is made about Jesus, the implication is that Jesus would serve as a sacrificial lamb, to atone for all of the sins in the whole world. Jewish readers and listeners at the time would have immediately gotten that reference, and probably gasped at the claim.

Towards the end of the book, in chapter 17, the final moments of the Last Supper are described. Jesus prays to God: ‘For You have given the Son authority over all people, so that He may give eternal life to all those You have given Him. And this is eternal life; to know You, the only true God, and Jesus Christ, who You have sent. I have brought glory to You by finishing the work You have given me.’ (John 17:2-4). 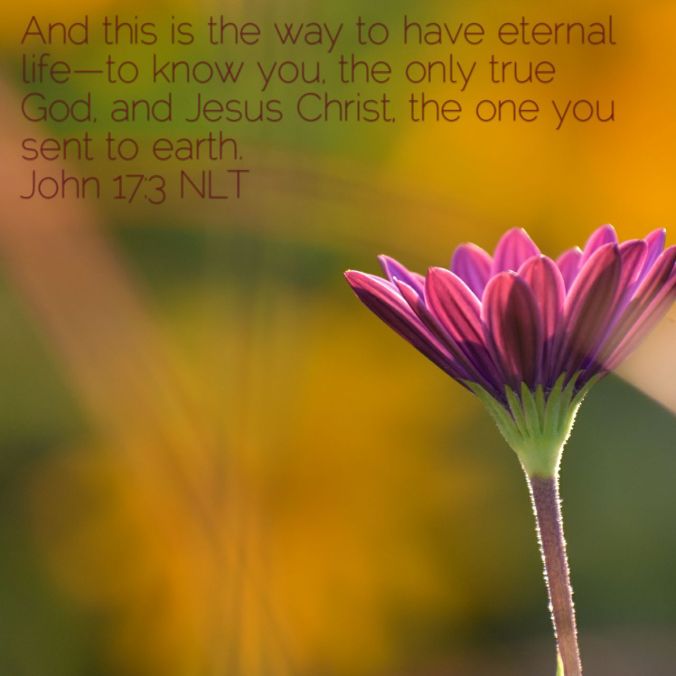 Jesus defines eternal life as knowing God, and knowing Jesus. And we can only get to God, through Jesus. We have to communicate with Jesus, to know God. And in that proces I realised that I was not only getting to know God; but I was also known BY God. He knows everything about me; knows my thoughts, good and bad, my past present and my future. He knows when I feel sad, and He knows my negative thoughts, and my deepest fears, and my darkest moods. Yet He loves me anyway. He has carried it, and it died with Him.

But to tell you the truth, I know He knows me and loves me and has forgiven me. I know it in my head, but I don’t live my life like I do. I don’t wake up every morning, with the complete peace that I am already forgiven, and more than that loved and cherished.
Jesus invites me into a completely accepting relationship, in which His love is totally unconditional. There is nothing I have to do to earn it. I don;t have to pretend to be nice, or try super hard to make Him love me. He is love, and so He loves me. But often I don’t live like I have this unconditional love.

Rather I often live as if Jesus sacrifice on the cross was unnecessary; that he did not have to die to forgive me. Often I think that I am on good terms with God. I pray to Him, I think I am a good person, I don’t cheat, I serve at church, I care for my neigbours, etc. I rarely recognize or accept that there are things I have done, or thought that I need forgiveness for. Because compared to others I am not so bad. But, in fact, we are all in need of saving, and we all fall short of the glory of God (Rom 3:23). We are a community of the broken, rather than of the righteous.

But more often than living as if the cross was unnecessary, I live as if it never happened. I try to finish it for myself. I forget that I am fully known, accepted, forgiven and loved. Instead I feel guilty and and ashamed of the things I have done, or the things I have thought. I try so hard to make things work, to be what people want or need me to be. I conform to my surroundings so that I fit in, because if I fit in I thought, then I’ll finally belong. But I learned that

Fitting in is actually the enemy of true belonging. (Brené Brown)

Because fitting in is trying to change who I am, so that I can be like somebody else. Whereas belonging means that I am loved and cared, not even inspite of my shortcomings, but often because of them.

I so often forget that I belong to God; that I am His. He has purchased me at the highest cost, to bring me closer to Himself. He has made me in His own image, with a purpose. He has taken my guilt and shame and given me love and belonging. I don’t have to change who I am for God; He has made me who I am. He loves me and He is more important than anything in this world.

And that last bit, yeah, that is often something I forget.

2 thoughts on “It is finished! – words of love”